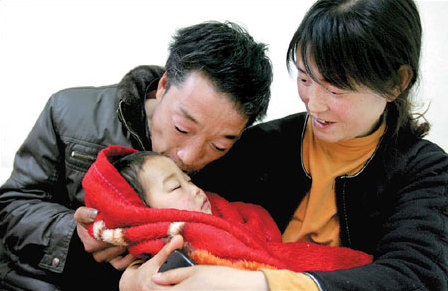 It was a chance meeting. But it made the difference between life and possible death of a 2-year-old boy suffering from leukemia. Just when lack of money had driven Li Guishu and Wang Zhihua to stop their son’s treatment and return home to Hebei province on Monday, they heard a round of loud applause for someone at Tianjin railway station.

It was Premier Wen Jiabao whom passengers were applauding. The premier was returning to Beijing after an inspection trip in Tianjin, the Beijing Times said on February 19.

Yang Zhengkui, Li’s brother-in-law, says he will never forget the scene. “The premier was shaking hands with the passengers. When he came to us, he asked what we were doing in Tianjin and I told him that the boy had an aggressive form of leukemia and we could not afford his treatment.”

The child was sleeping in his mother’s arms. Wen looked at him and enquired about the symptoms of the disease. He then held Yang’s hand and said: “Come to Beijing, and I will make arrangements for his treatment.”

Wang couldn’t believe her ears, nor could she hold back her emotions. She knelt in front of the premier and kept saying “thank you” before Wen and other officials lifted her up.

“It was like in a dream All we knew was that our child had the hope of life,” Li says.

On Wen’s instruction, their son Li Rui was sent to Beijing Pediatric Hospital, where he underwent a thorough checkup on Monday. The boy had undergone an ECG test and CT scans by yesterday.
On Tuesday morning, several State Council staff members visited Li Rui, and handed over 15,000 yuan ($2190), including 10,000 donated by Wen, to his parents.

Doctors have promised to do all they can to save the child. Li, a farm worker from Zhangjiakou, Hebei province, is still at a loss of words. The only thing he says is: “I want to write a thank-you letter to the premier.”

When Li and Wang first took their son to the emergency department of a hospital in June, the doctors suspected he was just suffering from fever. But on their second visit, doctors told them about the diagnosis.

Li and Wang rushed their son to a hospital in Zhangjiakou, but the 60,000-yuan bill was crippling for the family that earns only about 3,000 yuan a year. Hence, they were forced to return after only three months of treatment for Rui, the newspaper said.

But Li was determined to raise more money for his son’s treatment. So he sold more than 400 kg of plants and saved 2,000 yuan. He took Rui to Tianjin Blood Research Center this time.

But the cost of treatment in the Tianjin hospital was very high, Li says. That left the parents with no choice but to forego their son’s treatment.

And then the meeting with Wen took place.